v4.2.1 of Analyze This (Android) was released to the Play Store today. With this release, the App is now a much improved PGN Viewer/Writer and is thinner/sleeker/faster and comes with better performance! In fact, in our tests, PGN loading was 10x faster than the previous version!

☆ Search Board position + Quick game search!
Now the App comes with the ability to search your pgn games for any games that match the currently loaded board position.

Or you can search for any player or even combination, filter games by result or Opening ECO codes!

☆ PGN files load faster + Quick scroll
PGN games loading is 10 times faster than the previous version! You can also quickly scroll down or up by dragging the scroll bar (right edge of the screen)

☆ Stockfish 7
Both Free and PRO versions of the App get Stockfish 7.
On first App run, the latest version of Stockfish will be automatically downloaded. Unfortunately as is known, Critter still won't work on Android 5.0 and above. 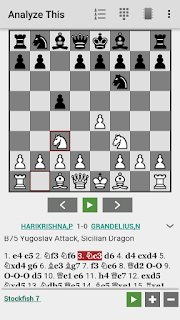 ☆ Change Notation language to English (non figurine), French, Norwegian etc
Didn't like the default Figurine Notation? You can now change that or even set the preferred language for the Notation from the Settings - Notation Options. You can also share the game in that language with your friends and coaches! 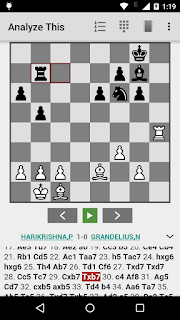 ☆ Many other improvements + bug fixes!

I had lots of other features and requests, but due to delayed release I could not add them all. Hopefully another new update will follow in March!

Email ThisBlogThis!Share to TwitterShare to FacebookShare to Pinterest
Labels: analyze this, analyzethishelp, stockfish 7