Can you find the best move for Black? (Warning: bloodshed ahead!)

My 3 min Blitz game on FICS. Can you find what I played in this position as Black? (full game replay at the bottom) 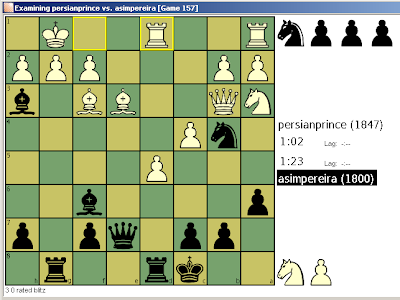 How should one think in this position?
In a blitz game, there is not much liberty to "think". But this is where Chess Intuition plays a big role.

1. White has just moved his Rook to e1 (away from his King and the important f-file)

2. Black has a nice pressure against the g2 pawn.
These two points should ring a bell that a Tactical shot is lurking and one should FIRST start calculating ...Bxg2 (even before thinking of ...Rxg2 since its easier to sacrifice a piece of lesser value)

3. After ...Bxg2 Bxg2, the natural Qe4 pinning the piece should be considered. This brings Black's most important piece in the game and closer to the enemy.

4. Analyze White's most obvious response i.e. f3 which protects the g2 Bishop and attacks the Black Queen which is on e4.

5. This is a somewhat critical position and you should spend some time here. Consider the "shocking" ...Rxg2 which takes away the last defender of the King and since you have another check with Rdg8.
The first obvious reply you should calculate is Kxg2 (Rook). When one has plenty of time on the clock, other King replies like Kh1/f1 can be considered (but why worry, since you have already recovered the piece if the White King does not capture your Rook!).

6. But what happens after Rxg2 and Kxg2 and Rdg8+? What now if the King moves to f2 i.e. Kf2? At this point, one should be happy to spot the nice little ...Bh4 which brings the last Black piece into attack and takes away important dark squares from the White King.

7. I did not calculate any other move beyond ...Bh4 except a quick little Rg2+ in case the King moves to d2. But this kind of think comes automatically to a "trained chess eye". It should be comforting enough to know that the White King is all alone (except the passive e3 Bishop which is actually and unfortunately blocking his own Queen from protecting the King-side), whereas Black now has his Queen, Rook and Bishop. Apart from the King moving to f2, you would know that any other King move like Kh1 or Kf1 (moving to a White square) is bad since the Black Queen captures on f3 with a check.