"The first of its kind!"
This World championship match touched many lives, and mine has been no different.

Back in September, I approached the AICF with a proposal to develop a Android app for the Match. They liked the idea and the rest is history!

There were lots of new things that I had never done before with my other Chess apps. It was a big challenge.

♚ The first line of code!
On, September 1st, 2013, I wrote the first line of code!
Given my familiarity with Java and affinity towards Google, I chose the Google App Engine as my server. (One of the main reason to use a separate server for my app was to reduce the load on the official servers, especially after the London Candidates' debacle during the earlier rounds). There were many technical hurdles that had to be crossed.
Line by line, file by file, the Android app and the corresponding server was brought to life.
But the main setback was not a technical problem, but a lack of response from the concerned teams that almost threatened to derail the app or some of its features.
There were so many questions that needed answers, but there was no one to answer! 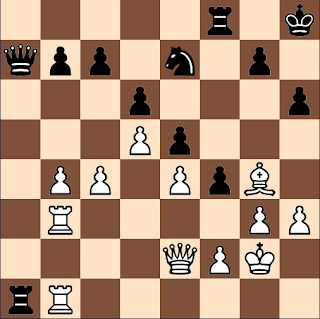 The first board prototype, using the color scheme matching the actual board from the Candidates! Lol. The teak theme was too dark on some phones, especially the black pieces on dark square.

♚ What you "fore-see" is not what you get!
But as it happens with so many projects, the end-product is almost always completely different from the initial idea that you had envisaged, and some times its good.
At some point, the "Cool Anand" and "Hot Carlsen" board ideas struck my mind.
The app had to be made personal. After all it was all about the duo. And the fans. Let chess fans proudly choose the board theme matching the player they support, is what I thought! 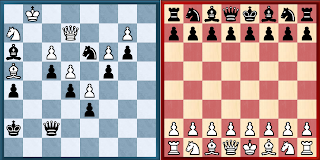 Tactics were never part of the initial idea, but they became one of the most liked features of the app! (Full set of 300 tactical puzzles of Anand and Carlsen are available for purchase via my iChess Android and iOS app)
Live video was! But even after the app was officially released, there were no details on how to access the live video! (lol, can only laugh when I think about it now!)
Picture gallery was optional, and remains optional till date! ;)
There were so many features that I wanted to add and so many changes that were requested by Chess fans, but then there is a limit to time, energy and motivation!

♚ Who will annotate the previous encounters?
The previous encounters had to be annotated. With my limited time and Chess skills, I could never had done justice to the master pieces. I initially approached a couple of Indian GM's, one of whom is well known for his satirical posts. But I did not have the money to offer nor did they have the time. (Note, the app was developed for FREE with no monetary payment. Just for honor and pride, or "loyalty huh?" as Vishy Anand told me at the pre-match dinner party!)
Then entered, Sagar Shah, the most energetic and entertaining Chess annotator I have ever seen. His annotations are like poetry! He agreed to annotate for the share of the "glory" and no money, although I did tell him that in case there is a chance to monetize the app, then I shall pay him 30% of the revenue. Thanks to the server costs, the revenue is negative! Ofcourse, being the "official" app, it could not serve any Ads and generate revenue. Imagine the app saying, "you can only watch the first two games for free. Rest of the games need $0.99, each) :P

♚ The first version
After several internal Beta test versions from Oct 21st to Oct 25th, the first version was released for public download on Oct 26th. I could now breathe easy, atleast that is what I thought!
Then followed a series of changes, bug fixes, improvements, additions, deletions. Overall, 15 versions were released since then, each carrying some improvement or bug fix or some unavoidable design change!

♚ Thanks
This app would not have been possible without the kind support of so many Chess enthusiasts and even non-enthusiasts (the app icon was developed by a "non-Chess" guy!)
Starting with Bharat Singh, who liked the app idea and immediately called up to take this forward. Sagar Shah and Swayams Mishra who helped with the Previous encounters and Tactics respectively. Such was Sagar's enthusiasm and commitment, that he would burn the midnight oil and stay up late till the morning and annotate the game (before he got busy with his own tournament)! I think it took a toll on him and he had a disastrous performance at the recently concluded Chennai Grand Master open tournament.
Soni Prasad, my college mate who designed the app icon even though he was faced with some personal tragedy and difficult situations.
Aart Bik, who offered the first "foreign" hand and translated the app to Dutch. BTW, he is the developer of the popular "Chess for Android" app.
Many of them came ahead on their own accord and helped with the translation. This is the real Chess spirit! Bruno Pellanda, David Kaufmann, Houssem Collo, Jan Hotarek, Michael Meyer, Sverre Eugen. And the many people on G+, Twitter and FB who helped with their kind and encouraging words.
Some times users don't realize how their words (reviews in this case) can positively or negatively affect others. For instance, a user did not like the recently added Norwegian translation and chose to give a bad review. That was enough to upset Sverre, who had spent the time and effort to help translate and had personally offered his help in the first place. "So let them do it from here. I stick to only playing chess", Sverre argued. The user who chose to award a bad review, never offered any help to correct the translation, inspite of asking for his feedback! Thats life!

♚ Future of the app?
Dalila - "I'll miss seeing the coloured notification 'a move has been made'". It was indeed a part of my life for the past 3 months and for many fans world wide. This is quite evident from the amazing response the app received. And I am truly grateful. 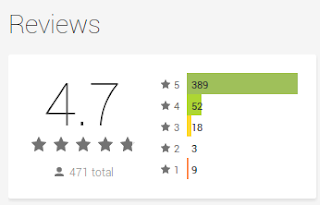 At one point, the app was #6 in the Top New Free Apps in the Brain & Puzzle Category on the Google Play Store!
So whats next? Like Deep Blue, the super computer, the app will be disassembled! But the parts will be used for a future project with the intention of watching live games and even more! Stay tuned!

♚ Perks of the job


Oh and, congratulations to MAGNUS CARLSEN, the new World Chess Champion!
(My 10 year old niece, who was "not interested" in Chess, now likes Magnus Carlsen and has taken to chess again! She plays Chess with her 8 year old brother who coincidentally likes Anand...still!)