Analyze This - I want a BIG board!

Everybody wants big things in life. Why should the Chess board on Analyze This be small?
I heard your feedback and today I have released v2.0.2 to Play Store with board size optimizations and minor enhancements for small screen phones.

Show/Hide Notation view - This makes the board bigger! 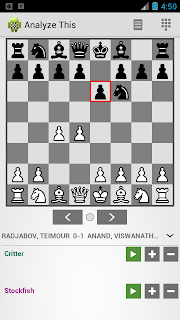 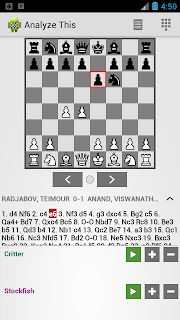 Just click the expand/collapse icon (^ - next to the Black player name), and you can enjoy a big board!

Disable Sound
You can now disable the sound from the Settings. 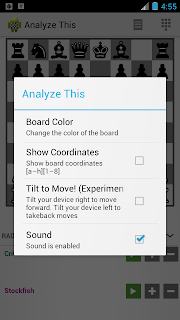 Engine fixes and minor enhancements
To the user who reported an issue with engine Robbolito; thanks, it is fixed in this release!

I just noticed this post on GM Pogonina's website and I thought I could easily go through the games on my Tablet, but unfortunately there was no PGN for download. Using a Chess board on a webpage is not the world's easiest thing.

So I searched the relevant games she had listed there, on Chessgames.com, and created a PGN. Thought it will be useful for others too.

Now I can sit back and play through the games using my Analyze This Android app!

"Top-10 chess games in 2012 according to Natalia Pogonina:
1. Volokitin - Mamedyarov. I had very few doubts about the first place. This is a fantastic game.
2. Kramnik - McShane. I believe this was Kramnik's supreme masterpiece in 2012. A great example of a sacrifice of an exchange.
3. Carlsen - Caruana. Magnus is known for his remarkable endgame technique. This game is a living proof of how good he is.
4. Gelfand - Anand. Gelfand took full advantage of the light-squared bad bishop. The fact that this game way played in the WCC match adds to its importance.
5. Bodnaruk - Javakhishvili. A great game by Anastacia Bodnaruk. White sacrificed two rooks and slaughtered the Black king.
6. Gustaffson - Kramnik.  A wonderful journey of the a-pawn :)
7. Ivanchuk - Vachier-Lagrave. The sacrifice on d5 is standard, but it never gets old. Especially when accompanied by such a nice move as 26.g3.
8. Carlsen - Topalov. A wild duel with fireworks. I love replaying this game over and over again :)
9. Aronian - Morozevich. A lot of splendid games have been played at Tal Memorial, but I decided to pick this one. Both sides has their chances, but in the end Black prevailed.
10. Rodriguez - Veskovi. An impressive attack on the king."

BTW, the complete list of 38 games is here
Posted by AsimPereira at 10:13 No comments:

Funny post-game analysis between Anand and Hammer after their R8 match in the Norway Chess tournament.

"Jon (Hammer) seems to have pretty much assumed that I blundered the pawn (h4...Qxh4)" - Anand
"Yeah I mean he already started this intimidation on twitter ...thought it was getting a bit worrying" -Anand

At one point while analyzing a possible mate, Anand says (tongue in cheek) "I didnt see the hammer blow"

No love lost between India and Norway!

Posted by AsimPereira at 11:11 No comments:

Analyze This in Action [Video]

Here is a video of Analyze This app in action.

Posted by AsimPereira at 23:43 No comments:

I am very excited and proud to release v2.0 of Analyze This. This is my first major release after quitting my day job and going full-time and I am personally very happy with this release. 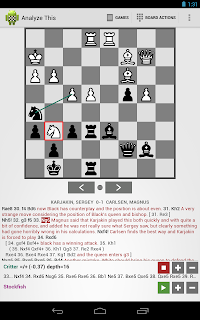 What's new?
THIS upgrade was made possible by the kind feedback and suggestions from many invisible friends! (whom I have never met and may never get a chance to meet!)

IMPORTANT
Both free and paid apps have Critter and Stockfish by default. If you only see one engine, then please re-install the app and start the app once.
Edit: Issue fixed in v2.0.1

Posted by AsimPereira at 05:11 No comments:

Starting with Analyze This v2.0, you can now install a compatible UCI Chess engine of your choice!

To install a new engine:
1. In Analyze This, click Menu - Manage Engines
2. Click "Install Engine" at the top right.
3. Download the UCI engine zip from the link at the bottom. Locate the UCI engine you just downloaded. (If you downloaded a zip file, then YOU need to unzip it first.)
4. Analyze This will run some quick tests to see if it is a valid UCI engine and show it in the list. Your engine will be pre-selected and ready for use. (For best results, deselect the engines that you are not interested. This will give you better performance and bigger board)

Note: Analyze This app does not limit the number of engines you can run simultaneously! However, running more engines will severely drain your device battery.

DOWNLOAD
What are you waiting for? Go ahead and download some UCI engines from below link:
https://drive.google.com/open?id=0B5UN6Nh9m6BjMFNYOG95azdLZEU&authuser=0

(Download and extract the UCI zip to your device. Then launch Analyze This and choose any engine from the UCI folder/<enginename>.