How to practice Chess Openings with iChess

As you know, iChess is great for solving the pre-shipped puzzles as well as any PGN-puzzle file that you may have.
One minor unplanned feature, which was released in v3.1.3 is the support for studying Chess openings.
You make moves for the winning side while iChess plays the other side.

Here is how you can do it:
1. Prepare a PGN file with your favorite opening lines. This will be your opening repertoire.
It is better to have each variation as a separate game in the PGN. For your preferred side, mark the game as won, in the PGN. Say you like to play the Kings Indian with Black. Then save the full or partial game and mark it as 0-1 (in the game header).
(This is the most important step for any serious Chess player and once you have your repertoire PGN ready, it can be used for many other functions within Chessbase PC software.) 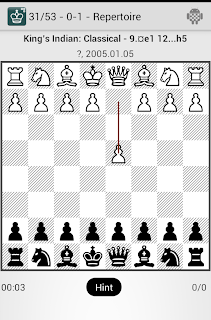 Ofcourse, you can use a Hint and all other iChess goodies!

This can be a good opening workout and imprint your favorite variations in memory. (Note: Even the top players need to "memorize" their opening lines")

This nice little feature can also be used for Solitaire or Guess the Move kind of Chess. Load a PGN with master games and try to guess the moves for the winning side!

Note: Currently, iChess does not give points for every move you make, but only for the complete game.
Posted by AsimPereira at 01:02 No comments:


Chess Book Study has graduated to v2.0 with lots of features and improvements and I am very excited with this release. 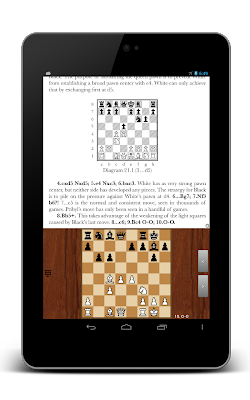 What's new?
☆ EBookDroid has been upgraded to 1.5.6. CBS now supports all the features of ebookdroid like Auto Crop, Split, Search etc.

☆ Works well with other Chess apps. Now "Copy PGN" can immediately open the position in Chess for Android or DroidFish apps. You can save the PGN from that app.
☆ Quick access to Board options. No long press required.
☆ Improved "Open Web" feature. Now incorporates a full fledged open source zirco browser (with some minor changes)
☆ Book and Board positions can be swapped. See Board Settings. Also has a left handed mode!
☆ Hold the left/right arrows to jump to start or end board positions.
☆ Many other UI and experience improvements like bigger coordinates, board background, always-on arrows, new Edit Board layout
☆ Bug fixes. May they RIP!

NB. Incase if the app crashes after upgrade, then simply uninstall and re-install both the apps.

Get it from the Play Store or download the Free version from my Google docs.

The Zurich Chess Challenge blitz touranament was won by Caruana (2757)!

World Chess Champion, Anand (2780) finished last in the 4 player round robin tournament.
Anand lost 0-2 to both Kramnik and Caruana and won 1.5-0.5 against Gelfand! (I hope its part of his tournament strategy!)

Check out this huge blunder by Anand against Kramnik. 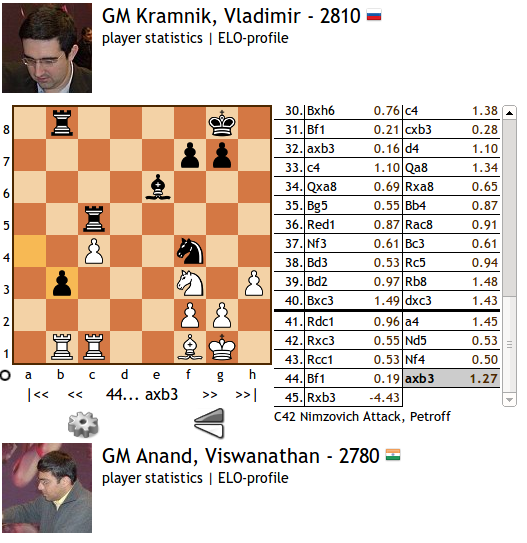 All blitz games can be viewed at the official site http://www.zurich-cc.com/games.html

The standard time control tournament starts today at 15:00 UTC+1.
Posted by AsimPereira at 21:20 No comments:

Recently I watched a pretty investing video of Kasparov talking to authors@Googlers.
He talks at length about chess, computers and innovation.


At the start of the video, the host talks about Kasparov's article in the NYTimes. In that long article, Kasparov gives a nice insight  into the world of chess and computers.

In particular, the following point struck me:
"Like so much else in our technology-rich and innovation-poor modern world, chess computing has fallen prey to incrementalism and the demands of the market. Brute-force programs play the best chess, so why bother with anything else? Why waste time and money experimenting with new and innovative ideas when we already know what works? Such thinking should horrify anyone worthy of the name of scientist, but it seems, tragically, to be the norm."

Here is a link to that article. Worth reading!

This reminds me of Larry Page's legendary 10x comment. 10% increment is not enough. Make it 10 times better!

Posted by AsimPereira at 05:51 No comments:

After his last round victory over Naiditsch, Anand was asked the most important question regarding his trusted second Peter Nielsen working with Magnus Carlsen.

"Peter and me spoke last year and he mentioned that he had an offer from Magnus. We discussed a little bit...came to a reasonable agreement.
I mean there is nothing complicated, he is working for Magnus. He has worked with Magnus in the past.
He was two timing (not exactly the expression I am looking for!) but he was working for both of us round about 2006-2007 and then ofcourse he has been a big part of my team.

No I am fine with it. We thought lets do Wijk Aan Zee for old time sake and he will switch to Magnus and thats what happened.

We agreed it and like I said and the very fact that he came to Wijk Aan Zee, I can say it was amicable and I will leave it at that."

Posted by AsimPereira at 05:28 No comments: